I was wearing blue the day I gave away my inheritance to a girl I’d never met before.

Had I been thinking clearly, I would have said I’d done it on purpose: one last dig at my mother before she hit the ground. Really, I’d been on the phone with the dry cleaner all morning the day before, begging them to fast track my black dress-shirt for the funeral, only to hang up at the thirty-minute mark after recognising a bitterness in my voice I’d only ever heard in hers.

It didn’t matter anyway. My mother would have found a problem with whatever shirt I wore. I thought it would be different with her gone. For years, I had been expecting to rip the chapter of my life spent catering to her, clean from my spine. Had been anticipating a through bullet wound the doctors would stitch up before sending me on my way.

Instead, the shrapnel of the last twenty-six years had remained, and I was left examining an ugly, jagged scar, thinking about what she would say if she were here. My pants were too long, my shoes didn’t shine, my hair had grown out longer than the prescribed two inches past my ears and I hadn’t gone running the barber to get it cut. My mother was better at sniffing out flaws than a beagle in a crowded airport.

Sighing, I lent back in my chair and pulled the envelope out of my back pocket and set it on the table. The reason I was here. It was thick and rectangular, a bump in the middle making it sit a centimetre off the table. At the top, the flap gaped open like a mouth from when the lawyer had handed it to me three days ago, thinking I was the M written in chicken-scratch on the front.

And that would have made sense too. M for Michael—my mother’s only child. She didn’t like children enough to try again.

Or so I thought.

I had the letter in my hands, one blunt corner jammed into the flesh between my thumb and my forefinger, waiting for an answer. In the kitchen, the screen door rattled like my mother’s ghost wanted to be let in.

‘You married her,’ I hissed.

It was the first spark of life I’d seen since she died. I watched the flame sputter briefly but fail to catch. Dad wilted against the loveseat as though he could make a home forever among the garden of floral throw cushions, still turned towards the seat she used to take up.

Around the room, evidence of his devotion remained—wedding pictures bolted to the walls, her slippers by the fireplace, a ceramic mug with a lurid lipstick stain that hadn’t been cleared from the sideboard—and it occurred to me suddenly that he didn’t exist outside of her anymore. It was a thought that scared me because I didn’t think I did either. Everything I had done in my life had been for her—medicine to please her, out of state tuition to spite her. Good grades and a parade of nice girlfriends to prove her wrong.

Now, when I closed my eyes, I saw myself in a vast empty room full of things I didn’t care about, plugging up gaps in the wall I didn’t know she had filled. I looked at Dad and I understood. It’s funny—what we took for granted.

Did I have the same exhaustion in my voice as Dad when I spoke?

What happens to the passenger when a plane loses its pilot mid-flight?

It hadn’t taken long to find Megan through Facebook. We planned to meet for a drink after the funeral, but she texted me the morning and asked to meet me at noon instead. I’d said yes. Now, I was thinking I shouldn’t have.

Waving the waitress away when she came by to check on me, I made a list of everything I knew about my half-sister.

Beside me, someone pulled out a chair.

‘Megan.’ My sister held out her hand.

I shook it once and watched her sit down. Frowned as she put her elbows on the table. Shook the urge to ask her to take them off.

She didn’t look like my mother. I didn’t know if I wanted her to. I searched her face for a pointed chin or hooded eyes like I could make sense of twenty years of hypocrisy by finding something familiar but came up empty. I wouldn’t have thought twice about passing her in the street.

I picked up the envelope and nudged it across the table. Megan took it, sliding a chipped, silver nail under the broken seal and pulling out the letter inside. I knew what it said. Had read it twice the day I received it by mistake and three more times in the car park on the way here. I’m sorry. I  love you. The usual last words to an estranged child but they stayed rattling in my head like my mind couldn’t comprehend them. Probably because I couldn’t remember the last time she said them to me.

When she was done, Megan put the letter face down on the bar and tipped up the envelope. A stack of plasticky, purple money fell into her palm. I fought the urge to roll my eyes. My mother didn’t believe in banks. She kept her savings bound up in a rubber-band under her pillow like she was afraid I’d steal off with it while she slept. The sight of it now, pressed against the cheap metal of Megan’s rings made me angry.

‘How did it happen?’ she asked.

When she didn’t look surprised, I continued to fume. I found out about my mother’s illness via a phone call from Dad when she was already in hospice care. She’d told him not to tell me until the semester was over. I spent a weeks’ worth of rent on a last-minute flight home. What else did this stranger know that I didn’t?

My voice was sharp and hazardous; black ice in a mouth that wasn’t my own. A cold weight settled between my shoulder blades, the length and width of a hand and Megan leant on her forearms and looked at me, her dark eyes sharp. I wondered what she saw.

‘Why did you invite me here?’ she asked.

‘You invited me,’ I reminded her.

‘If it’s an apology you’re looking for—’

‘—you’ve come to the wrong person—’

My ears buzzed. It was hard to breathe.

I watched the words ricochet, powerless to stop them. When they collided with Megan, she reeled backwards in surprise, knocking elbows with the girl sitting behind her who spilt a glass of sparkling water over the floor. It foamed hungrily over the cell phones and napkins in its wake causing squeals to erupt and chairs to shoot backwards at the next table over. The weight on my chest slithered quietly away.

For a moment, Megan was frozen, her cheeks red beneath a wide eyes and a choppy fringe. Then, she snatched the napkins from the table and turned around to apologise profusely to the girl beside her, helping to blot her wet jeans. When she was done, I stared at my hands and waited for her to leave but she didn’t.

‘Come on,’ she said, gathering her things. ‘Let’s talk somewhere else.’

Any other day I would have hesitated to follow a strange girl to a secondary location but today wasn’t any other day. We drove up hill in a procession: two black cars at a crawl until Megan pulled into the deserted car park at the summit and got out with the letter in her hand. She climbed over the low stone wall at the far end of the lookout and lowered herself to the grass and waited for me to follow.

The clouds above us sat low in the sky, forcing the sun beneath them at an angle that lit us up like stage-lights. Me, my half-sister and a few hundred dollars cash between us. Leading players in the strangest melodrama I’d ever seen.

On my wrist, my watch buzzed one o’clock and I quickly shut off the reminder. My mother’s funeral started in an hour and I wasn’t sure I wanted to go. Didn’t know if I had the strength. Or more accurately, didn’t know if I could walk away once it was all over.

I thought about how, when I was younger, I used to hide under my bed before family barbecues or birthdays or Christmas lunches I didn’t want to attend, my belly pressed against the dust on the carpet until my shirt was ruined and my mother would drag me out by my ankles. Everything was a fight with her. Every bad grade, every smart word. I struggled to arrange her into something soft in my head but couldn’t. She was glass in my palms and yet the thought of her gone terrified me more than any argument we’d ever had.

I wondered if Megan felt the same way.

Laughing, Megan smoothed the letter over her thigh.

It didn’t but I smiled anyway.

‘I saw you once, you know,’ Megan continued, folding the paper clean in half, then ironing it flat again with a chipper, silver nail. ‘She called my dad out of the blue one day when I was thirteen. Said she wanted to see me.’ Another fold. Two corners came together to form an arrow pointing away. ‘By the time we got there she’d changed her mind. It wasn’t a “good time” or something, I don’t know but on the way back to the car I saw your face in the window. You smiled at me.’

With a final fold she held her creation aloft: a delicate plane with my mother’s words cradled inside. I tensed as she wound her arm back, bracelets clanging on her wrist and pointed the nose to the sky. Pictured myself leaping forward and snatching the words back, hiding them against my chest. Making sense of everything my mother had left me without an answer to.

Instead, I watched it arch delicately through the air and disappear out of sight. 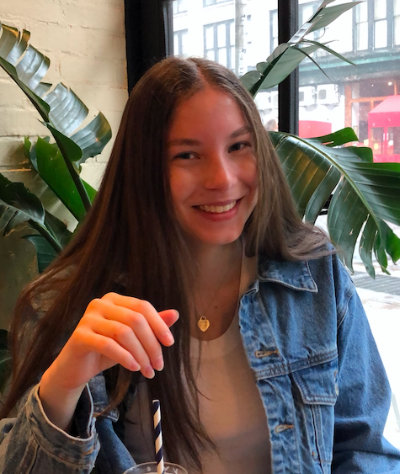